The following are excerpts taken from a collection of notes authored by Zhuping on April 22nd 2014 in Wuyishan. I picked out two sections of notes that focus on two Wuyi cultivars, one very well known and celebrated, and one widely used but rarely discussed.  My own comments are included in italics.

Cultivar #105, aka “Huang Guan Yin” is a tea bush known for yielding early. It’s always one of the first to be picked once the season begins. In this case it is being picked by machine, which actually takes more skill than you might think. If the machine is allowed to cut bushes too low, it will stunt the grown of next year’s tea. If the bushes are cut too short then their finished tea’s character will be too light.

#105 is used by tea makers for its outstanding floral smell. The tea makers in Tong Mu village even use it for their black tea, in addition to making wulong. If you only pick its buds you can use it to make the most expensive black tea in China, Jin Jun Mei. If you pick just one buds and two small leaves then you can use it to make Lapsang bohea. If you pick all of the opened leaves (as pictured), you make it in to the wulong tea known as Huang Guan Yin (Yellow Guan Yin).

Note: A very small amount of this tea is available for service in our Tucson Tea House.  Apologies to those reading from out of town! 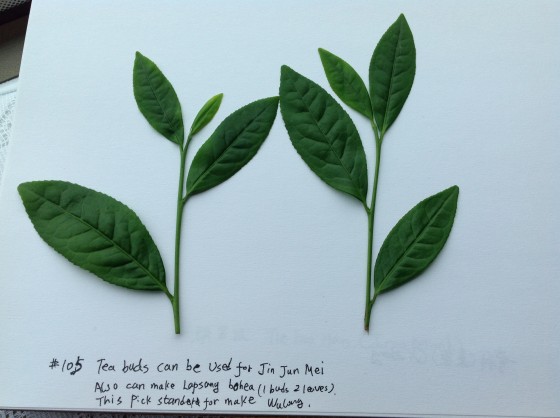 Thanks to government promotion over the last several decades, Shui Xian is one of the most common varieties of bush in Wuyishan’s tea fields. There is lots to be said about this cultivar, and its cousin from Chaozhou, but Zhuping’s notes focus on one aspect: the changes a tea bush’s age brings to its flavor.

Young Shui Xian — Like most tea bushes, Shui Xian usually yields its first useful leaf after about three years. The leaves of young bushes make for a intense and spicy brew.

“Gao Cong” (tall bush) Shui Xian – This is the farmer’s name for Shui Xian bushes over ten years old, although its not a term I’ve ever seen on the market. This is when the tea is at its peak for its yields. Its flavor continues to have the spicy body of younger Shui Xian wulong.

“Lao Cong” (old bush)  Shui Xian – Bushes that are over thirty years in age earn this distinction. At this point, the character of their tea is noticeably mellower than younger bushes. If the leaves are well processed, a sweet and enduring aftertaste, the yanyun, is very apparent.

Most of “old” Shui Xian us under 60 years old, but some very old specimens exist in Wuyi Shan, as we see below:

This is one of two Shui Xian bushes are in the back of Rock Wulong master Shi Ying’s family farm. They are about 120 years old now, and still healthy enough to pick, if you have a tall enough ladder.