Orders Over $50 Ship Free to Continental US

THIS MONTH'S SPECIALS from our shop

LEARN ABOUT TEA from our blog Yue Guang Bai (White Moonlight) is one of the most beloved teas in our catalog. Yet despite its popularity, it seems to be a difficult tea to categorize.  Is it sheng puer? Its Yunnan origins and its tangy, herbaceous aromatics suggest it could be. It lacks sheng puer’s typical astringency, though. Is it white tea?… // MORE

What’s So Special About Aged Tea? 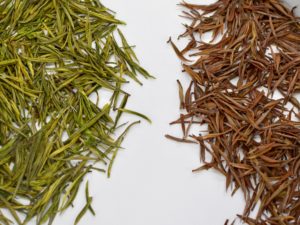 Though somewhat counterintuitive, aged tea is in fact a recent phenomenon. Before the 21st century, fresh tea was always considered to be the best. However, while it is true that freshly made teas tend to have the strongest and brightest aromas, many types of tea develop fascinating new flavors and textures with time. Tea that… // MORE

By Elizabeth Miranda, on September 3, 2019 in: Industry News, Specialty Tea Trade War With China From the beginning of American history China has been an important trading partner. One of the causes of the American Revolution was the monopoly of the East India Company that made it illegal for us to trade with China directly. Tea was the key element in that trade, helping to make… // MORE