October happens to be “Fair Trade Month”. Fair trade may or may not be related to the Fair Trade Certified logo used to sell products that come from, to use the old phrase, “The Third World.” Is the second largest economy in the world still in the Third World? I’m speaking of course of China, for those who think it is still Japan. How many fair trade projects are on going in Japan now that their status has slipped? Will the US be eligible for certifications when the Chinese economy becomes number one? There are quite a few tomato pickers in Florida that would like to vote democratically about funds distribution. A lot to think about but I can only examine this issue where I have experience: tea in China.

Fair Trade was originally intended to help small businesses in third world countries. Workers and farmers could join together in democratic co-ops, be given access

to broader markets, and receive fair payment for their products. At the time I’m writing this article, Fair Trade USA wrote on the topic of the impact of Fair Trade Certification that they’ve “enabled a democratic system where each community determines how their funds are used.” Wikipedia has a fairly good history of the fair trade movement starting in the 18th Century. However, fair trade certification has always been pretty meaningless within the Chinese tea industry, or any other industry in China, for that matter. Now, can you imagine a democratically organized co-op of tea farmers or workers in China?

The Chinese Communist Party, which owns all of the land and has a hostile position towards democratically organized groups, no matter what the purpose, governs China. Do you think the Fair Trade USA is bringing democracy to the Chinese countryside? Do you think that the community, as defined by Fair Trade USA, is the Chinese government? It is true that the government is no longer directly running business, but it does mean that the owners of what used to be government business have often gained the business through corrupt relationships with local officials.

The Divorce of Fair Trade USA and the European FLO

Fair trade is in the news due to the recent split between Fair Trade USA and the European FLO (as reported by Dan Bolton in the World Tea News). Fair Trade USA has furthered the gap between the original, core values of the founders of the movement and the marketing-focused business that Fair Trade certifying has become, particularly in the US. One of the main reasons for the split with the FLO was Fair Trade USA’s desire to certify large corporate plantations. Fair Trade has become a big business with a large and growing market in America where consumers trust labels and certifications without worry. Does this mean that the large plantations Fair Trade USA would like to certify (now that they have split from the FLO) will organize their workers democratically and they will get to determine how the money gets used?

According to the World Tea News, in a separate article, reporting that Numi Organic Tea is the nation’s leading brand of Fair Trade certified tea and tisane imports. The article singles out a Chinese producer, Dazhangshan Organic Tea Farmer Association or DOTFA. Allow me to quote the article just in case you are not a subscriber to the WTN: ‘The certifier cited examples such as the Dazhangshan Organic Tea Farmer Association in China which was able to purchase new tea processing equipment to improve the quality of its tea and the living conditions of its members. “Members of the association, nearly 35 percent of which are women, now make nearly 20 percent more than other families in the area,” according to Fair Trade USA.’

So who supplied the statistics that Fair Trade USA used in the above quote? Do you think that Fair Trade USA freely interviewed the peasant workers to gather these stats about women and the surrounding workers that were making 20% less than the DOTFA workers? It is certainly true that tea workers in China already do better than agricultural workers, for most other products, but that is true, fair trade or not; and I don’t know where to get the stats, maybe the government. Why is it that we don’t think through this kind of marketing, are willing to believe the absurd claims, and buy the product based a logo on the back?

I had a bizarre experience in Yunnan this year when I happened to have a meeting with an ethnic group’s spiritual leader, the Bulang Ethnic Minority in the Jingmai area. The Bulang have a culture where tea is at the heart of their spiritual beliefs, and have cared for an ancient tea forest for more than a thousand years. They have been advertised as a model of Fair Trade USA’s program in China for many years. Recently, they have disappeared from their website.

When I asked the leader of the Bulang about their dealings with Fair Trade USA and the affects of their involvement in the program, I heard a very interesting story.

I was first surprised to hear that the group had never received a certification, or at least the document saying so. He remarked the same about their organic certification. An American tea company had come by to spend the night on three separate occasions, each time dropping off some money, which the Bulang were very grateful for, and was put to good use. What is completely bizarre is that the tea company never bought any tea from them because they said it was too expensive to sell in the US. Tea from ancient trees hasn’t come cheap for centuries. So how did that exchange, as surreal as it sounds, end up Fair Trade USA certified?

We could look into other Fair Trade USA products originating from China and find some similar kind of bargain struck that at least doesn’t line up with what the purchasers of the product think the logo represents in principle. The Fair Trade USA website currently lists three Chinese producers. That’s not lot out of the 70,000 plus that exist there.

It is true that China has many poor farmers and workers. Is Fair Trade Certification going to actually change this reality? There will be no meaningful impact in China, but it sure makes selling products easier. Where does that leave us as consumers in America? We can certainly stand to look past mere package labels. But perhaps Fair Trade USA only opened its certification to plantations and corporate farming to be more “inclusive” so companies like Honest Tea, a branch of Coca Cola, can get in on the deal. Fair Trade USA is also hoping to partner with Walmart, Target, and Costco.

This is further proof that the absurd can be effectively marketed in America. Keep in mind that the little extra you pay for a Fair Trade product from China may be deceptive marketing.  As a consumer it is a much better buying choice to reward quality. Don’t compare tea to coffee though wine is a much more appropriate metaphor. When you look for quality, you are rewarding skill at the source and the team of professionals that produce a tea. There is no need for fair trade because skilled workers already are getting paid better than the unskilled workers that are making commercial grade tea. If you focus on quality in a global economy, you are, in the end, making a more meaningful purchase. Rewarding skill and substance always has more impact at the source; so don’t reward the clever marketing of middlemen.

Just as I was writing this blog, the WTN (Dan Bolton) published another article you should read if you are interested in this issue. It is about the confusion happening with vendors because of the break between FLO and FTUSA. Please note how the word “plantation” has now been substituted with the word “Estate”. I 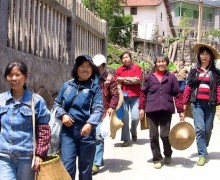 can say, without a single exception, that there is no tea being grown on “Estates” in China.

I sometimes hear a customer say, ‘I will only buy tea that is fair trade certified.’ Well, for all of those socially conscious consumers looking for logos, your options just got expanded.