One of the issues that we are asked about regularly concerns tea and sustainability. I have been a bit distracted while I am getting ready to take a trip to China next week, and I wanted to just get caught up and talk a little bit about what is happening with Seven Cups, me, and what ever pops into my mind while I am writing this. I have been neglecting my blog and Twitter and been focusing on our Seven Cups Facebook page. I can only do so much and Zhuping has been sending back great photos from our tours, I recommend you check it out if you haven’t already. It is just so easy to get them on-line, she takes them on her iPad and they get uploaded via Dropbox without her doing a thing.

We are full into our buying season and the tea has been just excellent this year and, even better, the prices so far have matched the prices from last year. It says to me that the expected slow down in the Chinese economy is occurring. That is one thing about being a farmer or working in an agricultural based business, trends are easily felt there before it trickles up to the broader economy.

I wanted to say something about pesticides because they are once again in the news with Celestial Seasonings getting busted by the same group that busted Teavana last year. The Glaucus Research Group seems to be making money by exposing publicly traded companies and selling things short. It is true that they have a not so hidden agenda with exposing these companies, but without having the proof, they would not make much. If you read the reports you can see that the independent testing agency in Europe did a very thorough job, removing what ever doubt there might be about the motives of the Glaucus Research Group

It shouldn’t come as a surprise to anyone that there are pesticides used in commercial tea production, and that third world countries would be using some 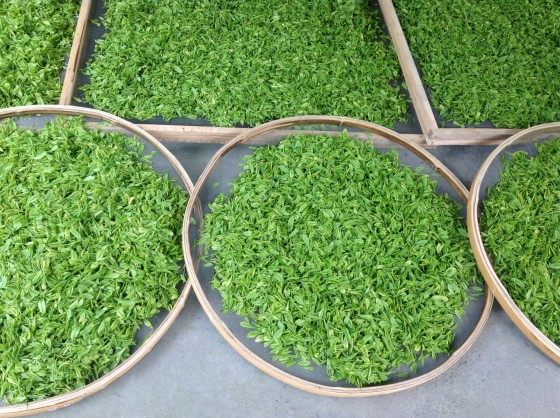 illegal ones, which are probably cheaper. The boney finger always gets pointed at China, the great polluter, with pollution in Beijing as bad as when I was a kid in L.A. They give us a good run for our money when it comes to putting carbon in the air, but let’s not forget that Africa and South America are where most exported tea is produced, not in India and China, where they predominately drink their own tea. It can all be explained in a couple of words: cheap, commodity, and quantity. For the most part, bugs come to in the summer. In the tropics however, bugs are omnipresent. It’s always summer. It provides for a long growing season and an abundant yield. I think that it is a broader truth that if you want cheap tea and cheap food, pesticides come along with the price.

How that relates to the way we buy tea, we have a few standards that get us started. We don’t buy summer tea. I know that is an obvious one. We buy tea that is grown at a high altitude, where there are not as many bugs, we don’t buy from commercial growers, and, with a few exceptions, they are certified organic. The truth is that the mountainous areas where we buy our tea doesn’t lend itself to commercial agriculture at all. Terroir is everything in tea as well as wine, and don’t let anyone tell you any different. The other magical thing about the tea plant in relation to terroir is that over time the plant itself develops defenses to predators as it becomes part of the local biodiversity. That is one of the functions of both caffeine and tea polyphenols. Tea and sustainability is a critical issue for the tea industry. I am going to London in June for a meeting of the Ethical Tea Partnership to discuss tea, pesticides, and the sustainable future. I have done some informal consulting with them about the Chinese tea industry. They have a program that teaches farm workers in China how to safely work with pesticides. I recognize the irony, but remember that the ETP is an NGO funded by the major tea producers. While I think it is a great thing that they are keeping farm workers from poisoning themselves, they have ignored the possibility of reaching sustainability without chemical pesticides, something China has had for 2000 years in tea through focusing on quality not quantity.

The Chinese have some shining examples of quality over quantity in recent history with their Anji Bai Cha. It is a major money making crop that only has a spring season and pesticides are banned in the use of its production in the whole county. Compare this to 1980 when there were only two Anji Bai Cha plants in existence. It is a good example of the dynamic nature of the Chinese tea industry. Another good example, maybe more familiar to Americans, is the case of white tea. There may not be the higher standards as in the Anji example, but it was a crop that barely existed twenty years ago and is now a very common tea. The crop was completely driven by the export market and has always fetched good prices.

Changing the agricultural model outside of China, and supporting a return to it inside of China seems like a logical and tested way to sustainability in the tea industry, as is true in food production as well. It doesn’t mean an end to the commodity model, but at least adjusting to a hybrid that considers incorporating the principles of the Ethical Tea Partnership seems like an other logical step. Of course prices will go up, but everybody, including the consumer benefits, if not financially than with better health and quality of life.