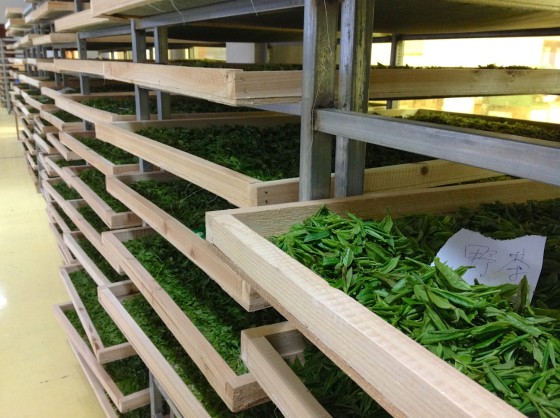 I have been able to travel a lot this year, and talk to a lot of people, from consumers, to producers from a number of different countries, to tea educators, to small tea business owners, to tea journalists, to corporate tea executives. It is been a log time since I have written a blog because it’s been hard for me to get my mind around what is going on with tea. Clearly the ground is shifting in a big way. 2013 looks to be a pivotal year for the tea industry. I think that tea trends are headed in a very positive direction for both consumers and producers of quality tea, but at the same time a shift away from commodity tea what will not be so positive. These changes are consistent with what I wrote about in 2011 and 2012; it’s only that their pace is accelerating.

Let me just give you some highlights from my personal experiences.  I’ll start with the Toronto Tea Festival. Toronto is a great city, and I think it is pretty progressive when it comes to food; at least I eat pretty well when ever I go. The festival was the first of its kind in Toronto and at one point there were an estimated 500 people waiting in line to get in. This was in the middle of winter. I talked with people that had come quite a distance to be there. The lectures were standing room only all day long. I want to add that besides the festival, I attended a tea sommelier class at George Mason College that I thought was excellent, with 25 to 30 people in the class.

Next I went to a puer conference in Puer (Simao) City. I had been there the year before and had been one of the few foreigners there, grouped with an English artist that was being honored at an art festival that was going at the same time, and an American student who was schooling in Kunming. This year there was close to 200 foreigners from around the world, which included a  group from the US. The group had been organized by the Specialty Tea Institute, if organized is the appropriate word. They were complaining all of the time about not know what was going on, but the important thing was that they were there. It is rare to see Americans at tea conference in China, much less other foreigners. Joe Simrany was there, trying to survive Chinese toasting practices, and the French representative managed to insult the Chinese attendees with a critical speech about Chinese Tea Culture, especially when it came to puer.

After this I was back to the US to attend the World Tea Expo. This year felt different to me. A lot of the big tea companies like Rishi Tea were conspicuously absent. The energy seemed very positive and the attendees very congenial. I have to say I really had fun there this year, and there seemed to be a real focus on a higher level education. It had what really felt like a small business orientation, and was well attend by writers, bloggers, and tea educators who are not merchants, who are developing an intellectual support infrastructure that is so necessary to the elevation of the tea industry.

Then I was off to London to attend the meeting of the Ethical Tea Partnership. It was pretty weird just being invited since I am not a partner, and the ETP is all about the commodity tea industry. Here again, I was having a lot of fun, and the meeting was very interesting to me. The theme of the meeting was what was the industry going to look like in 2030, and sustainability was the buzzword, though the sustainability of the industry was not discussed, rather than the environment. One of the representatives of a very old and respected London company said that he thought the industry had to undergo radical changes to survive, though he didn’t say what those changes might be. I waved my arm in the audience to ask that question, but didn’t get called on. It seemed like the inevitable outcome would be full mechanization, since maintaining workers was going to become impossible.

My next stop was Denmark. I gave a talk to tea businesses and restaurants in Copenhagen at the Asia House, and my hour-long presentation turned into 3 hours, because of the questions they wanted answered. After Copenhagen I went to Aarhus. Simply Tea organized a talk with local consumers, that was originally planned for 20 or 30 people, and in a very short time the group expanded to 118 people and Simply Tea and to find a place to have it in the last minute. Denmark is a primarily coffee drinking country, and tea has become a very interesting subject there as they are discovering fine tea. We were very surprised at the crown, which included a broad range of ages and occupations.

This might be just my very myopic view point, always looking for any proof that our business is on the right track, but I feel the really seismic event of this year was the recent opening of Teavana’s new shop in NYC and Charlie Cain’s return from Starbucks retail coffee division to the tea side of Starbucks. You can watch Howard Shultz’s interview on CNBC  here. Starbucks is really going after tea in a big way, and making promises from the beginning to up the ante where quality and education is concerned, which Teavana did not do. The reality is that even with the promise of better quality Starbucks is going to have a hard time delivering because they don’t have the sourcing skills in China to pull it off, though the do have some pretty deep pockets. Never the less, more people are going to get exposed to better quality tea that is readily available now, and they will really build the market. For companies like Seven Cups that can beat them for quality, it is a blessing because they will create a lot of new customers that will be looking for better tea, just like Starbucks made it possible for independent coffee roasters and innovative coffee business could thrive. It’s not good news for a lot of existing tea businesses that can’t find wholesalers that can bring them the tea that will allow them to do better than Teavana, and don’t have the resources to source themselves. (Just as I was writing this Margo Adler at NPR called me to ask about Teavana. Check out her story here.)

Big investors are getting on board with the bigger Teavana copy cats like David’s Tea, but they are going to run into the same wall. Still that is where the money is going, leaving the 2500 or so small independent companies hustling to differentiate themselves with little to work with in relationship to tea, while Teavana opens 1000 new shops in the next couple of years in neighborhood like yours. The reorganization of the industry is likely to be drawn in the future with quality establishing the major lines of division.