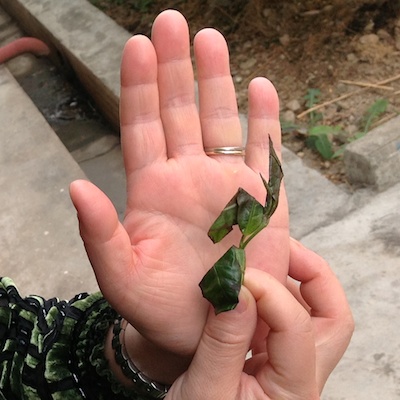 These days, writing about tea on the internet is such highly organized enterprise that I have to admit I’m hesitant to enter the fray. But alas, here I am: yet one more tea merchant writing a blog. If you were to ask me six weeks ago, I would have said this the last thing the Chinese tea drinking public needed. As it is, good information about tea is surrounded in commercial noise and for anyone interested in finding some honest information about the beverage online, there is a terrible amount of marketing babble to wade through.

Of course, with a little bit of reflection, I’ve had to admit such a statement is way too cynical and unfair to the whole of online tea writing. When Austin proposed that I step in for him on Seven Cups’ blog, I took a long look at what is and has been written about tea on blogs and websites. There is the commercial yapping, yes, but one also has to recognize there are some great brains out there writing about tea in blogs for the raw pleasure of it. At least since the days of usenet’s rec.food.drink.tea newsgroup, any sociable weirdo with a computer and a tea habit has enjoyed a shot at some informed and commercially neutral discussion. Although the online tea meeting has since moved on to other domains, the amateur discourse on good tea remains committed in cutting through the misinformation that tea is woefully packaged in.

I feel we tea mongers still do have some perspective worth sharing, though. As tea geek Michael Coffey recently wrote, for better or worse, someone curious about tea will sooner ask questions of the person selling to them than they’d even search for an answer in Google. From being that first point of reference, we should at least have a good understanding of the basic and relevant questions for people who are just getting interested good tea. My aim with this blog is to dig into just these questions, and address them with the concise and honest way I can. (The deep, dark, and esoteric surveys of tea industry and history will still be left to Austin.) In doing this, I’m also keen to go back to the original curiosity that got me started enjoying tea and enjoying thinking about tea, as well.

As far as my personal history with tea goes, I got hooked into it by a local butcher. About a decade back, when first started working for a cafe in my hometown, I liked tea well enough, but it was not until I met a regular customer that I really started to enjoy it in any serious way. There was a fellow named Paul who would walk in after his shifts cutting meat — his apron still on and freshly bloodied. He’d ask for Long Jing or Yan Cha with a special concern for its origin, belting out garden names, counties, provinces, and all. After a confrontation with this terrifying sight, I reasoned there was a lot more going into these leaves than I had given mind to. Paul, apart from being a man who knew both Chinese tea and beef steaks, was a traditional martial arts enthusiast with little good to say about the way Chinese martial arts has been repackaged for the West over the past half-century. Naturally, when we had discussions about tea, he held a concurrent enthusiasm for finding what is “traditional,” “original,” and “authentic” in Chinese tea making. He encouraged me to cultivate a sense of these concepts if I was sincerely interested in Chinese tea. These same sentiments ultimately led me to work at Seven Cups. Now, as I write this blog, I’m keen to continue looking back toward both the basic questions and excitement over origin that we tea drinkers hold dear.