‹ How Tea is Consumed in Some Other Parts of China
Charles Grey, Earl Grey – A Peculiar Tale of Black Tea › 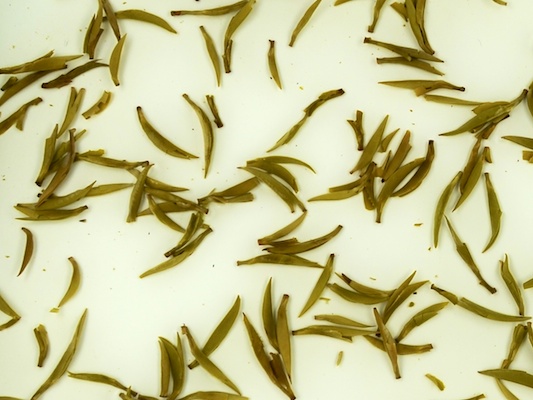 Years ago I had the good luck to hear a veteran tea maker give a lecture on processing techniques that bracket one category of tea from another. His talk passed through great detail on the chemical contours a tea leaf and how manipulating them just so will yield a green tea versus a black tea versus a wulong.  By the end of the lecture, several of us in the audience asked about the category of yellow tea – just what was it, exactly? He explained that this was probably the result of degradation of chlorophyll in a guided drying process. He excused himself for not being able to speak with more specifics – stating something close to, “I’ve only made it once, and that was an accident with a batch of green tea.”

It seems that by many Chinese tea drinkers, Yellow tea was regarded as exactly this – green tea gone wrong. As result of the processing hinted about above (and more thoroughly explained here), yellow tea’s young leaves lacked all the bright and grassy character that seasoned green tea drinkers adore and demand. As result, Yellow tea’s unusually low-pitched floral, mineral, and sugarcane flavors have long gone overlooked as vestiges of a dying niche. It’s been feared that teas made in this labor intensive style would soon not fetch enough money in the market to warrant their continued existence.

Looking back to six years ago when Zhuping, Austin and myself worked together to write the yellow tea info page on Seven Cups’ website, I can see we took a number of asides throughout the text to moan over the uncertain future of this quietly wondrous style. We did, however, conclude with hope that interest would stir up market demand and rekindle its production. Now, to my happiness, it seems these hopes have begun to bear out.

As the commodity tea model loses consumers to more “traditional” teas, and as the interests of new tea drinkers – both in the west and east — grow in sophistication, yellow teas have gained ground, at least as a curiosity.

This isn’t to say we’re on the cusp of yellow tea being adopted into mainstream American health food marketing, like say white tea and Puer tea have been. However, a fair number of new tea drinkers are coming into our tea house asking for “yellow tea” and I wouldn’t be surprised if other vendors reported the same. Even if the United States is not yet importing containers loads of “yellow tea” to fill Snapple bottles, enough interest in the style among consumers has lead to something of a yellow tea renaissance. For evidence of this, I point to the new styles of yellow tea that have emerged from non-traditional producing regions in China and even in India.

The old guard may turn their noses up and question if these new styles can possibly be as well made as those few yellow teas with several hundred years of pedigree. Perhaps, but for my part, I find the efforts of these new producing regions very exciting. Besides, messing up a batch of tea while trying to emulate another style isn’t necessarily a bad thing. Tea historians suggest a good number of innovations fruited out of this kind of happy mistake – oolong and black tea, and yes, yellow tea, to name a few.

As for the effect of this popularity on the traditional yellow tea producing regions, I look to our experiences in the last few years sourcing there. For the traditional styles of yellow tea, in particular Jun Shan Yin Zhen, it’s been apparent that as demand rises, the yields of their traditional growing regions remain more or less fixed. As result, authentic leaves from the classical styles, are still hard to get and expensive. Jun Shan Yin Zhen now ranks as one of the most expensive teas per gram that we buy for our catalog. On the bright side, as is the case with Tong Mu village and the mania over their black tea, a market that tolerates these higher prices can bring wealth and keep talent at the production bases for these teas. Yes, we’re all paying more for the traditional stuff and it is harder to get, but the style survives and maybe be even improves. Fair trade at its finest, some might say.