The Rarity of Anji Bai Cha 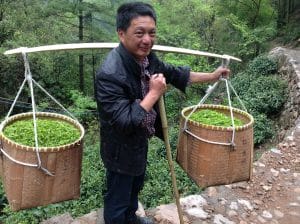 Seven Cups was the first to import Anji Bai Cha five years ago. It is a rare green tea that was lost for eight hundred years. Whenever you hear about white tea being mentioned during the Song Dynasty, it is Anji Bai Cha they are referring to, which means white tea. However, AnJi Bai Cha is not a white tea; it is really green tea.  White tea as we now know it wasn’t invented back in those days, neither was oolong or black tea for that matter. The Song Dynasty emperor, Song Hui Zhong, named this tea because the color of the brewed tea was the color of white jade.  One bush was discovered in the 1980’s. The entire crop was propagated from that one bush by cuttings. Today Anji Bai Cha is now one of the most sought after green teas in China. It is easy to understand why Song Hui Zhong loved it so much. Why it was lost is a great mystery.

The winter in the Anji hills can be very cold, as it was this year. The cold stresses the tea bushes and consequently causes the bush to create a lot of amino acids that add to the sweetness of the tea. The amino acids also make the tea drinker feel more relaxed. One of the interesting characteristics of the best Anji Bai Cha bushes is the yellow waxy appearance of the tea leaves. When the temperature reaches 18 degrees Celsius, about 65 degrees Fahrenheit, the leaves turn from yellow to green. The window for harvesting the tea is very short, making the best tea very rare.

Zhuping spent a few days in Anji during the harvest, and sent back some great photos that show very clearly the difference in color of the fresh tea.