‹ 2 Years, Too Much: Perspectives on the U.S. Tea Industry
Dahongpao, A New Chinese Tea Bubble? › It is just about that time of year when we start asking ourselves why we started a tea business in Tucson. The monsoons are hovering in the evening, sparing a drop or two, providing just enough humidity to stop evaporative coolers from working.  Today it is raining hard and roofs all over Tucson are leaking. Business is slow, but there are still die hard tea drinkers that come into teahouse in the afternoons. Most of us that live in the desert know that cold drinks are not good for you in the heat; still, iced tea sales are up. Very often in the hot humid areas in the South of China, you’ll be offered some white tea when you go and get your hot feet massaged because white tea is thought to be cooling in Chinese medicine.

The weather has been awful everywhere this year, but in the most areas where tea grows it has been exceptionally bad. Our white tea arrived a couple of weeks ago.Prices for Bai Hao Yin Zhen (Silver Needle) doubled in China because of the cold extended winter and it was hard to get. We were able to get some for less because of our relationship with the producer. It took longer that normal for it to reach the US because of floods all across Southern China. Production was effected and the supply network shut down. This year you can expect that a lot of American companies will not have any 2010 at all, and the ones that do will be charging a lot for it. The most expensive I’ve seen is $31 per ounce.  Even if the weather conditions are more favorable next year, don’t expect that the prices will come down to where they historically have been. Times have changed for the domestic market in China.

It is hard to say what will happen in Yunnan.  Instead of a cold winter they had an extended drought, followed by torrential rains. Most of Yunnan is steep mountains of red soil. In the south were tea originated it is heavily forested and one of the most bio-diverse areas in the world. Roads and a strong puer market brought a measure of prosperity to what had been a very poor area of China. Even before the roads came the forest was being burn away to plant sugar, a quick and easy money crop. Of course the summer rains washed away the red mountain soil that had been quickly depleted by sugar.

While an effort was under way to introduce less destructive crops, the puer boom hit. The government strongly suggested that  a varietal that had high production potential should be planted on terraced slopes.  There was, however, a problem with this plan. The varietal was foreign to the local biodiversity, so it needed a lot of fertilizer and insecticide to survive.  The terraces also had a tendency to wash away. The older bushes didn’t have the same problems, but there was clearly not enough to satisfy the greedy speculators. Then the market crashed. Puer could not be sold, and the production over night turned to green tea production for the domestic market. This year the heavy rains played havoc on the ‘terraced tea’. 8 or 9 years ago it would be hard going to reach the tea producing areas of Yunnan and a four wheel drive vehicle was a necessity. The paved road changed that, but the roads up to where the best puer grows are not paved, and many have been washed away this year. 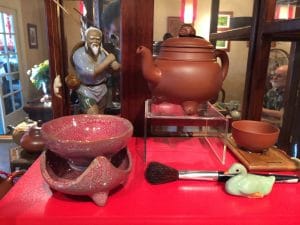 The Chinese market is very dynamic, so I don’t want to make too many predictions. When I first started exploring in Fuding area for white tea producers, I also tried to find some old white tea masters to interview, but I could not find any. It was because twenty years earlier the area was producing black tea primarily and the new white tea makers had shifted with the market from black tea making. Almost half of all the factories in Fujian in the middle 19th Century where owned by Russian companies. Things can change quickly in China, which for a ancient civilization, has always been true.

Things are also changing rapidly in Yunnan too. The market hasn’t recovered from the crash. Big companies like Da Yi and Xia Guan, the new privatized versions of the old government factories, and the biggest offenders when it comes to terraced expansion, are doing ok because of their marketing  power, and may be able to push their prices a bit. It is really hard to say since so many people lost serious money a few years ago.

The tea this year however has been exceptional, what there is of it, and it sold for a very good price. There is a fear that I have secretly held for many years. I’m afraid that by the time enough people appreciate good quality tea, they will not be able to get any because the Chinese will being buying all of it. Corax, the moderator of the award winning tea blog Cha Dao, wondered in a recent post whether or not good quality tea would survive the weather and the tenuous economy. The Chinese, recognizing the value of tea, will continue to supply the demand for good tea, but don’t expect there to be any more bargains.

The signs in the market are easy to read in the countryside. It has already starting to happen. When you visit the village tea markets where farmers are selling to producers, as was the case this year in Anji, the farmers are coming to market in brand new cars dressed very fashionably, and producers were paying the same price that consumers were paying 10  years ago. That’s not true across China, but it is true that tea, in most places where better grades of tea are produced, the community does better economically compared to areas where tea is not produced. Yunnan, when I visited first, not that many years ago, has be come one of China’s success stories through tea and tourism.

There is a reason why tea has been so valuable in the East for millennia. The American and European tea industry may never get it. They write Chinese tea off as if it were an afterthought, even though they are pushed towards China by a consumer that is ever demanding better quality and more variety. Most are still peddling tea that traders are making pennies on per ton, and blending and flavoring, putting it in soft drinks and skin cream, to compensate for awful leaves that are grown in the ever-disappearing areas where cheap labor exists to work the plantations that defined the now defunct British Empire. They still believe that clever marketing and packaging will do the trick for them, and that it is possible to produce puer in Malawi.

This year has been a challenging year for us. Sourcing has been difficult because of the market conditions in China. Competition for tea has been fierce.  Prices have gone up and demand has increased in the Chinese domestic market, not to mention Japan and Korea, both of which know the value of good Chinese tea.  The American tea industry’s lack of awareness of what is going on in China can’t be explained away, as it was during the Qing Dynasty, when the Europeans believed that green tea and black tea came from two different bushes.  This kind of myopic frame of reference that excludes China it is merely arrogance and a commitment to a corporate agribusiness model that is dying of it’s own environmental gluttony and economic inefficiency making it doomed to be unsustainable  in the long term.

I am grateful for our customers that do get it and help to keep us alive as a business. When I started in the business the conventional wisdom was that Americans didn’t have the capacity to appreciate good tea. I thought then, and even more so now, that was nonsense. I’m still pretty unsure about about the American tea industry, or the European tea industry for that matter. One of our customers came into the teahouse after being away for awhile and said he was sure glad that we were still in business. Me too.